History is rarely well served by cinema; this 1967 epic is all-over-the-place when it comes to getting even the most basic facts right, and that extends to the fake-news title of Don Chaffey’s film. Confusing from the get-go, there are no Vikings in this film. No Vikings, no Viking Queen. This is, in fact, a fictional version of the story of Boudicca, the Celtic warrior who became a British folk hero, and whom absolutely no-one would describe as a Viking Queen. So forget about horns, helmets, long-ships and so forth; we’re not going doing any of that.

Instead, Chaffey’s film starts with a confusing array of maps, voice-over and text, setting the scene for Queen Salina, who gets firm instructions from her father on his deathbed; the governance of her peaceful thiefdom of Icena is to be shared with the occupying Romans, led by Justinian (imported kinda-star Don Murray). Played by fashion model Cartita, Queen Salina faces up to her opposite number, but behind the scenes, plots are made to depose her. In opposition to her rule are a roster of character actors, including Tristram (soon to be Dr Who Patrick Troughton), Octavian (Andrew Keir, making the most of his big nude scene), Night of the Demon’s Niall MacGinnis and a truly bonkers turn from Donald Houston as Maelgan. Looking like Angel Has Fallen-era Nick Nolte as Santa playing the Ghost of Christmas Present, Houston’s over-acting is something to behold, even side-lining such reliable hambones like Troughton and Keir. And Hereditary fans should look out for Wilfred Lawson as the actual King Priam, seen in the flesh before turning up in the tree-house of horror finale in Ari Aster’s flick. 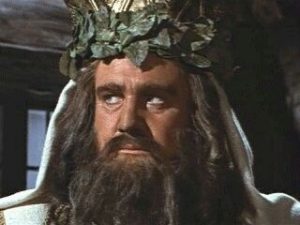 If that all sounds like a jumble, then it is, complete with the Irish army playing Druids and Romans and large-scale battle scenes in which everyone gets down and dirty in the mud. For 1967, sex rears its head with remarkable frequency, with some decorous and unexpected nudity. Inexplicably, the most dynamic scenes were cut for certain markets; these include a remarkable scene in which prisoners are trapped in a giant wooden cage above a gaping hole, and drop to their fiery deaths as the cage is set alight.

These lurid scenes give some taste of Chaffey’s intent; a bloody slice of hokum in the fashion of 300. Unfortunately, these scenes are few and far between, and it’s a long wait before Salina figures out that a chariot with deadly blades on the wheels is the best way to challenge the patriarchy. The Viking Queen was a costly flop for Hammer, possibly costing them a distribution deal with Fox, but it’s certainly an intermittently lively piece of work, with uneven performances and an impenetrable historical perspective that makes you wonder if you’ve missed a few lectures; it seems lacking that there are no dinosaurs in this film.