What critics hailed as “Anthony Newley’s monument to his own totally uninteresting sex-life’ is widely understood to be one of the worst films ever made. That lengthy title, in the spirit of many 1960’s freak-out escapades, probably doesn’t help, although it also suggests that Newley had some idea that his musical-phantasmagoria would be recorded in the history books as a career-destroyer, and that the film itself would drop directly into the dustiest oubliette in cinematic history. But does this lost film deserve such a calcified reputation?

Let’s start by re-evaluating the writer/director/producer/star. Newley was a big success of the swinging sixties. He was an actor, a popular singer and, in combination with Leslie Bricusse, a writer of hit songs, from Goldfinger to The Candy Man, as featured in their score for Willy Wonka and the Chocolate Factory. The men self-effacingly called themselves Brickman and Newberg, and their biggest success was probably the catchy, innovative musical Stop The World, I Want To Get Off!

It was in the vein of the latter project that Newley, this time in collaboration with ad-man Herman Raucher, created Heironymus Merkin, emboldened by Fellini’s ground-breaking 8 ½ to smash the rules of cinema. They hoped to create a no-hold-barred, semi-autobiographical reflection of his own success, stardom, and the lack of morality he perceived in the permissive society around him.

The result is hideous, but that does seem to be deliberate. Newley seemed to be hooked on the idea of confession, and his detailing of his own sexual misadventures through the character of Hieronymus Merkin is humble-bragging of the most toxic kind; a key image is women queuing up to bed the star, who has become bored of the endless treadmill of sex and adulation. Did Newley really imagine that the public were going to warm to such brazen admissions? And yet his strategies are not unique; Bob Fosse pulled off a similar ‘tears of a clown’ number in All That Jazz, and the focus on self-destruction is no less febrile here.

As a film, Merkin doesn’t really have a story; it’s a meditation on Newley by Newley, and sees him making and watching home movies about himself on a beach in Malta, accompanied by his family, plus his new wife Polyester Poontang (Newley’s actual wife, Joan Collins). There’s also some critics (including Victor Spinetti) to swap faux-comedic barbs with, plus seedy old-time comics including Stubby Kaye, George Jessel, Milton Berle as Goodtime Eddie Filth and Bruce Forsyth as Uncle Limelight. The show-business scenes, with clown make-up and puppet themes, recall Fellini, but also bear a resemblance to Rob Marshall’s Chicago (2001), specifically the striking staging of Mister Cellophane.

Heironymus Merkin is a personal, ambitious and influential film with an emphasis on pathos and self-pity. The intensely personal nature of the production seems like a miscalculation of what audiences might want to see, and Newley’s career never recovered. The film, viewable only on a tatty dupe, is almost unwatchable, and yet has the fascination of a train-wreck, a car crash and a dumpster fire simultaneously. And given what we know now about Newley’s subsequent unhappiness, it’s a film that’s gained in credibility and authenticity over the years; a new print would be worth exhuming, if only to provide the punch-line to a shaggy-dog anecdote about one of the most wayward talents in Hollywood history. I can’t provide a link, but the ad/poster below should be enough to dissuade the unwary for dabbling in this area. 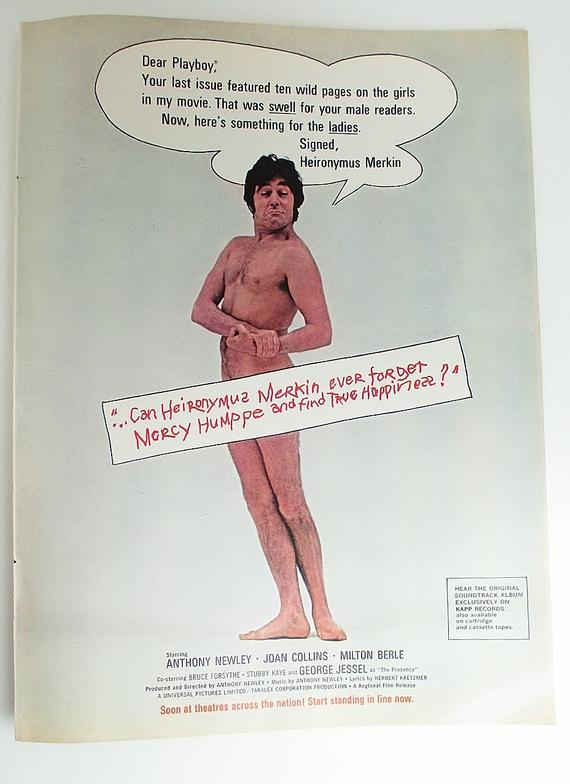