There are reasons for liking something other than it being ‘good’; this 1977 thriller based in a 1962 book by Alistair MacLean is perfectly awful in many ways, but somehow these flaws only make it more endearing. “Everyone was drinking on that movie, we were all so f**king miserable’ explained star Richard Harris in a magazine article, defending his consumption of a bottle of vodka every day while re-writing the script. If you want to understand what drinking a bottle of vodka every day does to your writing process, try watching Golden Rendezvous; director Freddie Francis and Christopher Lee abandoned ship while the film was in production.

For a great bad movie, several things have to go wrong at once, and replacement director Ashley Lazerus’s film hits the wrong note from the opening scene with a fabulously inappropriate swirling synth score by Jeff Wayne, one which mimics his War of the Worlds hit. Meanwhile John Carter (Richard Harris) stands around on an quay with a clipboard, bad hair-cut and milk-bottle spectacles looking about as officious as a lolly-pop man while various characters scuttle on-board the liner and floating casino Caribbean Star. These characters include the ancient John Carradine, sporting the look of a man freshly embalmed, the comparatively youthful Burgess Meredith hamming it up as a gambler, old favourites Dorothy Malone and Robert Beatty, David Janssen, who appears to have a glass of whiskey glued to his hand, Harris’s real-life wife Susan Beresford (Ann Turkel), and John Vernon as Luis Carreras, a man with a nuclear bomb. Vernon left the set to play Dean Wormer in Animal House, and was probably not the ideal casting to portray genuine menace, but that’s just one of the problems here.

Many films have issues with consistency, but Golden Rendezvous suggests that Harris’s idea of a rewrite was to throw the script in the air and re-arrange the pages where they fell. Carreras’s men take the ship over and brutally machine gun the crew, and yet Carter and Beresford are more preoccupied with whether to re-ignite their relationship. ‘I was wondering, should we bury the hatchet?’ he muses coyly while the bloody corpses pile up on deck and the clock on a nuclear bomb ticks down; it’s the kind of narrative dissonance that Team America nailed, but no less funny to discover in latent form here.

Given the film’s preoccupation with money, specifically gold bullion, it’s also notable that court cases subsequently proved that Golden Rendezvous was largely financed by South African government with money that was intended to be used to help black film-makers. Certainly, the acting, action, music and the entire production are verging on criminal, and yet there’s some fun in a film written and performed by practicing alcoholics on peak booze-cruise. There’s something admirable in characters who, on discovering that terrorists have boarded their ship, take action by throwing a cocktail party to flush them out via social chit-chat. Ideally seen with a glass of something 40 per cent proof in one hand, Golden Rendezvous’ hackneyed heroism and jauntiness in the face of terrorism make it a classic re-watch for those who love the idiocy of bad movies. This film was never issued on DVD in the US, but was broadcast on Scottish television on what seemed to be a continual loop during my childhood. 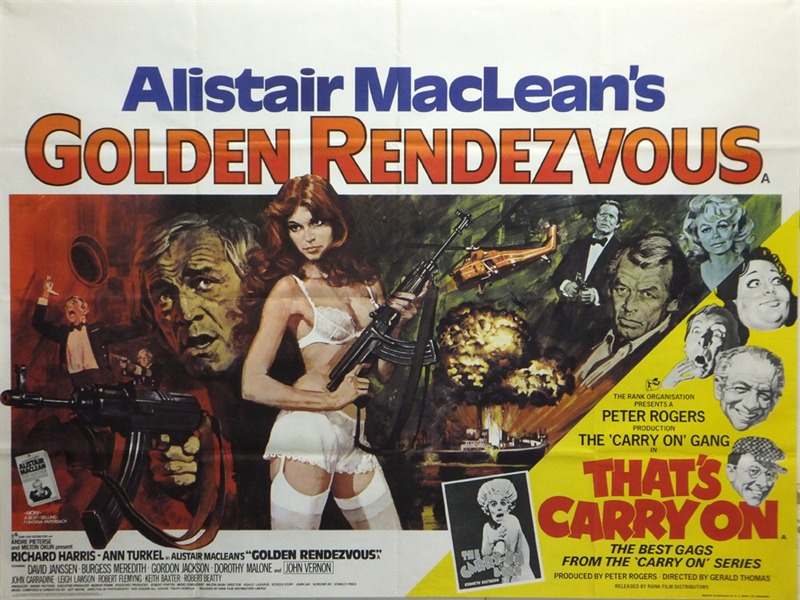